THE STORY OF
THE
PURPLE THREAD 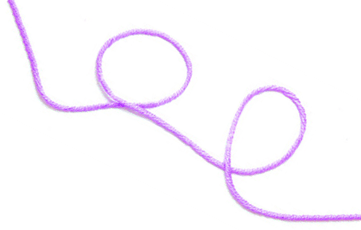 In around 65 AD Nero was Emperor of Rome.  Now Nero had a seriously twisted sense of humour and would derive an enormous amount of perverse pleasure from humiliating the prominent citizens of Rome.  Now you must understand to be Roman was everything and the most valuable thing a Roman had was their standing in society.  So to be publically humiliated was, for some, a fate worse than death.

One of the ways Nero would entertain himself was to write ridiculous, humiliating pantomimes and then order, under pain of death or banishment, prominent Roman citizens to act in them.  One day he commanded Florus, a well-known Roman historian and a noted Stoic and philosopher named Agrippinus, to act in one of his plays.

“Because I do not even deliberate about the matter. For he who has once brought himself to deliberate about such matters, and to calculate the value of external things, comes very near to those who have forgotten their own character.  For why do you ask me the question, whether death is preferable to life?  I say life. Pain or pleasure? I say pleasure.”

“But if I do not take a part in the tragic acting, I shall have my head struck off”.  Florus replied.

“Go then and take part, but I will not.  Why?  Because you consider yourself to be only one thread of those which are in the tunic.  Well then it is fitting for you to take care how you should be like the rest of men, just as the thread has no design to be anything superior to the other threads.  But I wish to be purple, that small part which is bright, and makes all the rest appear graceful and beautiful.  Why then do you tell me to make myself like the many?  And if I do, how shall I still be purple?”

The above story is taken from the discourses of Epicetetus, himself a stoic and philosopher.  There are a number of powerful messages in the passage; staying true to yourself even in the face of death and knowing and understanding why you are special are just two.

I read this many years ago and adopted it as both my professional and personal life philosophy. I wear a purple thread on my wrist to remind myself that remaining true to yourself, maintaining your integrity and character at all times, even in the face of seemingly incomprehensible consequences, is the most important thing.

I hope you get as much out of this simple piece of string as I have.